In Code_Aster, some time is necessary resume the analysis to make a more accurate post processing.

As long as you work on your machine and using a graphical interface such as that of AsterStudy, the procedure can be trivial and immediate. But what if you have to resume an old code_aster analysis saved on cloudhpc.cloud, the cloud computing service provided by CFD FEA Service?

Let’s see the procedure together.

Go to the Storage folder and select the folder. In this folder we have to edit the .export file by inserting some command strings sequentially.

To modify the .export file, click on the icon with the word edit and proceed to add the new command.

The command to add is the following:

Now you have to relaunch the analysis, going into simulation and following the classic procedure with which the analysis is launched in CloudHPC. (see this article for more information)

At the end of the analysis we notice the creation of a new folder in which the new data will be saved.

Go in the storage to modify both the .export file and the .comm file

We go to the end of the document and before FIN() we insert POURSUITE().

Between this command and the command FIN() we insert the new commands.

In the example in question we want to create a command to print the results of the fields calculated in the MECASTATIQUE solution.

We then insert the string IMPR_RESU(RESU=_F(RESULTAT=reslin),UNITE=80)

We go to the .export file and edit the string from RC to RDC and then write the command to print the results file

Let’s save everything and relaunch the analysis.

The new data are now avaible in the storage. 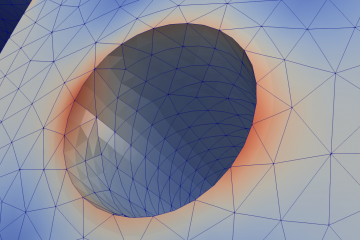 You have run your simulation with code_aster FEM on the cloud and it is converged and now you need to post-process the results.The results files are several hundred GB and you don’t want to saturate Read more… 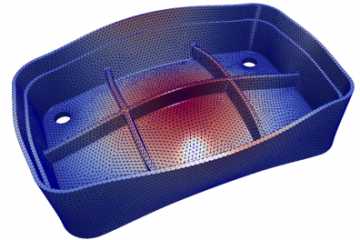 On cloudHPC it is possible to execute code_aster cluster with OpenMPI. This means the process is going to be divided among the cores available on the instance so your simulation can proceed faster. When executing Read more…

During a FEM calculation it is important not only to be able to intelligently model a structure by making the necessary simplifications, but also, be able to understand the best solver is to use. The Read more…